Welcome! To the Sarah & Duck Wiki!! 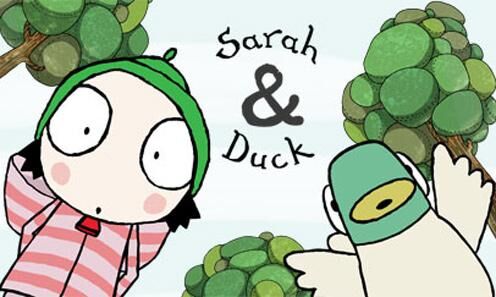 We’re a collaborative community wiki, with contributors from all over the world. We ask only for you to be polite and have common sense on this wiki please.

The series follows the adventures of Sarah and her best friend Duck and the relationship between these two characters and the adventures they have together in their own wobbly and imaginative way. CBeebies state that the show has two learning themes: 'Friendship and imagination' and 'Problem Solving'.

Sarah & Duck is narrated by Roger Allam, Sarah is voiced by then seven-year-old Tasha Lawrence, and Scarf Lady is voiced by Lesley Nicol

The world that Sarah and Duck live in is similar to modern life in the UK, there are notable differences though which add to the quirkiness of the world. Buses are amphibious and drive through water and they are also capable of running on land. The buses are fan propelled on land and underwater.

If you haven't seen Sarah & Duck and want to; if you are in the UK you watch the avaliable episodes on BBC Iplayer or if you are outside of the UK you can order Sarah & Duck on DVD from Amazon and BBC Shop. Episodes are also available on ABC Iview and the ABC Kids App.

Retrieved from "https://sarah-and-duck.fandom.com/wiki/Sarah_and_Duck_Wiki?oldid=4505"
Community content is available under CC-BY-SA unless otherwise noted.